Al Qassimi criticizes the boring contents of some news.

By: Mariam Yousef
Sultan al Qassimi  pointed during his lecture at Zayed University two days ago that some news organizations tend to use direct and boring information in the context of their news stories . 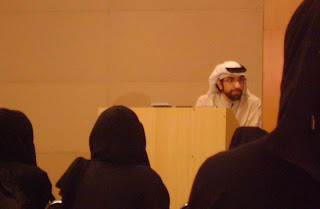 Al Qassimi talked about one of CNN headlines which published during Egypt revolution saying : “ protests irrupted in dabanhoor.” He pointed regarding to this headline that the responsibility of the media is to let the audience know more about  the unknown places and cities like dabanhoor, in terms of size, population and location as an extra important information in the news in the context.
From Sultan’s  experience in twitter he found that people tend to go to social media to get the extra important information which the media channels left.
The  lecture had around  70 media students and faculties and all of them were interested in Al Qassimi’s speech about the social media. At the end of the lecture a student from CCMS asked Al Qassimi a powerful question saying that if the UAE  has a democracy as Kuwait has. The question  shocked Al Qassimi and pleased him as the same time  for the high level of curiosity the ZU students have about the democracy and policies in the UAE and the GCC.
Audio
Posted by converged481 at 11:05 PM